Configurations of the One Step Multi-Drug Screen Test cup with the Integrated come with any combination of the above listed drug analytes. This assay provides only a preliminary analytical test result. A more specific alternate chemical method must be used in order to obtain a confirmed analytical result. Gas chromatography/mass spectrometry (GC/MS) is the preferred confirmatory method. Clinical consideration and professional judgment should be applied to any drug of abuse test result, particularly when preliminary positive results are indicate

Cotinine is the first-stage metabolite of nicotine, a toxic alkaloid that produces stimulation of the autonomic ganglia and central nervous system when in humans. Nicotine is a drug to which virtually every member of a tobacco-smoking society is exposed whether through direct contact or second-hand inhalation. In addition to tobacco, nicotine is also commercially available as the active ingredient in smoking replacement therapies such as nicotine gum, transdermal patches and nasal sprays.

In a 24-hour urine, approximately 5% of a nicotine dose is excreted as unchanged drug with 10% as cotinine and 35% as hydroxycotinine; the concentrations of other metabolites are believed to account for less than 5%.1 While cotinine is thought to be an inactive metabolite, it’s elimination profile is more stable than that of nicotine which is largely urine pH dependent. As a result, cotinine is considered a good biological marker for determining nicotine use. The plasma half-life of nicotine is approximately 60 minutes following inhalation or parenteral administration. Nicotine and cotinine are rapidly eliminated by the kidney; the window of detection for cotinine in urine at a cutoff level of 200 ng/mL is expected to be up to 2-3 days after nicotine use.

Fentanyl, belongs to powerful narcotics analgesics, and is a μ special opiates receptor stimulant. Fentanyl is one of the varieties that been listed in management of United Nations “Single Convention of narcotic drug in 1961”. Among the opiates agents that under international control, Fentanyl is one of the most commonly used to cure moderate to severe pain. After continuous injection of fentanyl, the sufferer will have the performance of protracted opioid abstinence syndrome, such as ataxia and irritability etc, which presents the addiction after taking fentanyl in a long time. Compared with drug addicts of amphetamine, drug addicts who take fentanyl mainly have got the possibility of higher infection rate of HIV, more dangerous injection behavior and more lifelong medication overdose.

Synthetic Marijuana or K2 a psychoactive herbal and chemical product that, when consumed, mimics the effects of Marijuana. It is best known by the brand names K2 and Spice, both of which have largely become genericized trademarks used to refer to any synthetic Marijuana product. The studies suggest that synthetic marijuana intoxication is associated with acute psychosis, worsening of previously stable psychotic disorders, and also may have the ability to trigger a chronic (longperm) psychotic disorder among vulnerable individuals such as those with a family history of mental illness.

Elevated levels of urinary metabolites are found within hours of exposure and remain detectable for 72 hours after smoking (depending on usage/dosage).

As of March 1, 2011, five cannabinoids, JWH -018, JWH- 073, CP- 47, JWH- 200 and cannabicyclohexanol are now illegal in the US because these substances have the potential to be extremely harmful and, therefore, pose an imminent hazard to the public safety.

6-Monoacetylmorphine (6-MAM) or 6-acetylmorphine (6-AM) is one of three active metabolites of heroin (diacetylmorphine), the others being morphine and the much less active 3-monoacetylmorphine (3-MAM). 6-MAM is rapidly created from heroin in the body, and then is either metabolized into morphine and excreted in the urine. 6-MAM remains in the urine for no more than 24 hours. The presence of 6-MAM guarantees that heroin was in fact used as recently as within the last day. 6-MAM is naturally found in the brain, but in such small quantities that detection of this compound in urine virtually guarantees that heroin has recently been consumed.

Risk of physical dependence increases if Benzodiazepines are taken regularly (e.g., daily) for more than a few months, especially at higher than normal doses. Stopping abruptly can bring on such symptoms as trouble sleeping, gastrointestinal upset, feeling unwell, loss of appetite, sweating, trembling, weakness, anxiety and changes in perception. Only trace amounts (less than 1%) of most Benzodiazepines are excreted unaltered in the urine; most of the concentration in urine is conjugated drug. The detection period for the Benzodiazepines in the urine is 3-7 days.

Ethyl Glucuronide (ETG) is a metabolite of ethyl alcohol which is formed in the body by glucuronidation following exposure to ethanol, such as by drinking alcoholic beverages. It is used as a biomarker to test for ethanol use and to monitor alcohol abstinence in situations where drinking is prohibited, such as in the military, in professional monitoring programs (health professionals, attorneys, airline pilots in recovery from addictions), in schools, in liver transplant clinics, or in recovering alcoholic patients. ETG can be measured in urine up to approximately 80 hours after ethanol is ingested. ETG is a more accurate indicator of the recent exposure to alcohol than measuring for the presence of ethanol itself.

Acetaminophen is one of the most commonly used drugs, yet it is also an important cause of serious liver injury. Acetaminophen is the generic name of a drug found in many common brand name over-the-counter (OTC) products, such as Tylenol, and Prescription (Rx) products, such as Vicodin and Percocet. Acetaminophen is an important drug, and its effectiveness in relieving pain and fever is widely known. Unlike other commonly used drugs to reduce pain and fever (e.g., nonsteroidalantinflammatory drugs (NSAIDs), such as aspirin, ibuprofen, and naproxen), at recommended doses acetaminophen does not cause adverse effects, such as stomach discomfort and bleeding, and acetaminophen is considered safe when used according to the directions on its OTC or Rx labeling. However, taking more than the recommended amount can cause liver damage, ranging from abnormalities in liver function blood tests, to acute liver failure, and even death. Many cases of overdose are caused by patients inadvertently taking more than the recommended dose (i.e., 4 grams a day) of a particular product, or by taking more than one product containing acetaminophen (e.g., an OTC product and an Rx drug containing acetaminophen). The mechanism of liver injury is not related to acetaminophen itself, but to the production of a toxic metabolite. The toxic metabolite binds with liver proteins, which cause cellular injury. The ability of the liver to remove this metabolite before it binds to liver protein influences the extent of liver injury.

Cathinone, also known as benzoylethanamine, or β-keto-amphetamine is a monoamine alkaloid found in the shrub Catha edulis (Khat) and is chemically similar to ephedrine, Cathine, methCathinone and other amphetamines. Cathinone has been found to stimulate the release of dopamine and inhibit the re-uptake of epinephrine, norepinephrine, and serotonin in the Central Nervous System (CNS). These neurotransmitters are all considered monoamines and share the general structure of an aromatic ring and an amine group attached by a two-carbon separator. Internationally, cathinone is a Schedule I drug under the Convention on Psychotropic Substances. Cathinone has been shown to selectively metabolize into R,S-(-)-norephedrine and cathine. The reduction of the ketone group in cathinone will produce cathine.

Cathine, also known as d-norpseudoephedrine, is a psychoactive drug of the phenethylamine and amphetamine chemical classes which acts as a stimulant. Along with cathinone, it is found naturally in Catha edulis (Khat), and contributes to its overall effects. It has approximately 10-14% the potency of amphetamine.Cathine is a Schedule III drug under the Convention on Psychotropic Substances.

Detection of Cathine in urine thus provides evidence of presence of Cathinone and/ or Cathine use, by the person, whose urine is tested.

Allow the test cup, urine specimen, and/or controls to equilibrate to room temperature (15-30°C) prior to testing.

1. Bring the pouch to room temperature before opening it. Remove the cup from the sealed pouch and use it as soon as possible.

3. Technician replaces and secures cap while the cup is on a flat surface.

5. Technician peels off label to reveal adulteration strip(s), if applicable.

6. Technician peels off the label on the multi-drug test card to view results.

8. If results do not indicate adulteration, read the drug test result at 5 minutes. The drug test results remain stable for up to sixty minutes. See the illustration below. For detailed operation instructions, please refer to the Procedure Card and Color Chart.

9. . If preliminary positive results are observed, please send the cup to the laboratory for confirmation.

INVALID: Control line fails to appear. Insufficient sample volume or not conducting the test as instructed are the most likely reasons for control line failure. Review the procedure and repeat the test using a new test device.

The strips contain chemically treated reagent pads. Three to five minutes following the activation of the reagent pads by the urine sample, the colors that appear on the pads can be compared with the printed color chart card. The color comparison provides a semi-quantitative screen for any combination of oxidants/pyridinium chlorochromate (PCC), specific gravity, pH, nitrite, glutaraldehyde and creatinine in human urine which can help to assess the integrity of the urine sample. 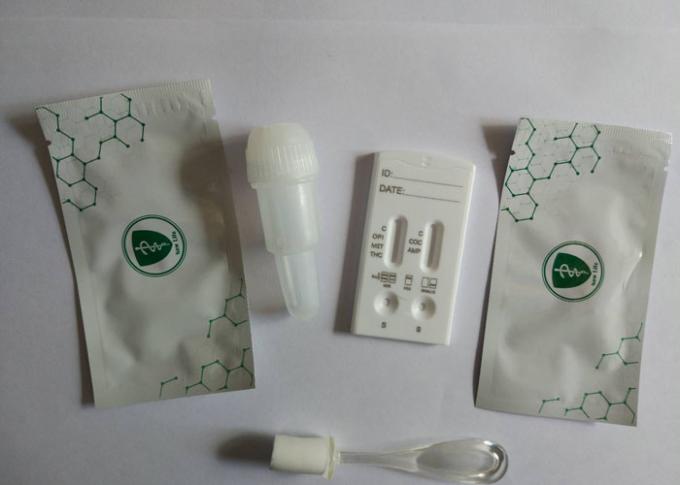