Benzodiazepines are medications that are frequently prescribed for the symptomatic treatment of anxiety and sleep disorders. They produce their effects via specific receptors involving a neurochemical called gamma aminobutyric acid (GABA). Because they are safer and more effective, Benzodiazepines have replaced Barbiturates in the treatment of both anxiety and insomnia. Benzodiazepines are also used as sedatives before some surgical and medical procedures, and for the treatment of seizure disorders and alcohol withdrawal. Risk of physical dependence increases if Benzodiazepines are taken regularly (e.g., daily) for more than a few months, especially at higher than normal doses. Stopping abruptly can bring on such symptoms as trouble sleeping, gastrointestinal upset, feeling unwell, loss of appetite, sweating, trembling, weakness, anxiety and changes in perception. Only trace amounts (less than 1%) of most Benzodiazepines are excreted unaltered in the urine; most of the concentration in urine is conjugated drug. The detection period for the Benzodiazepines in the urine is 3-7 days. The DIA Rapid Test Cassette (Urine) is a rapid urine-screening test that can be performed without the use of an instrument. The test utilizes the antibody to selectively detect elevated levels of Benzodiazepines in urine. The DIA Test Cassette (Urine) yields a positive result when the Benzodiazepines in urine exceeds the cut-off level.

The urine specimen must be collected in a clean and dry container. Urine collected at any time of the day may be used. Urine specimens exhibiting visible particles should be centrifuged, filtered, or allowed to settle to obtain clear specimen for testing. Specimen.

1. The 6-MAM Rapid Test Cassette provides only a qualitative, preliminary analytical result. A secondary analytical method must be used to obtain a confirmed result. Gas chromatography/mass spectrophotometry (GC/MS) is the preferred confirmatory method2.3.

2. It is possible that technical or procedural errors, as well as other interfering substances in the urine specimen may cause erroneous results.

3. Adulterants, such as bleach and/or alum, in urine specimens may produce erroneous results regardless of the analytical method used. If adulteration is suspected, the test should be repeated with another urine specimen.

4. A positive result indicates presence of the drug or its metabolites but does not indicate level of intoxication, administration route or concentration in urine.

5. A negative result may not necessarily indicate drug-free urine. Negative results can be obtained when drug is present but below the cut-off level of the test.

A side-by-side comparison was conducted using the Rapid Test Cassette (Urine) and GC/MS. The following results were tabulated: 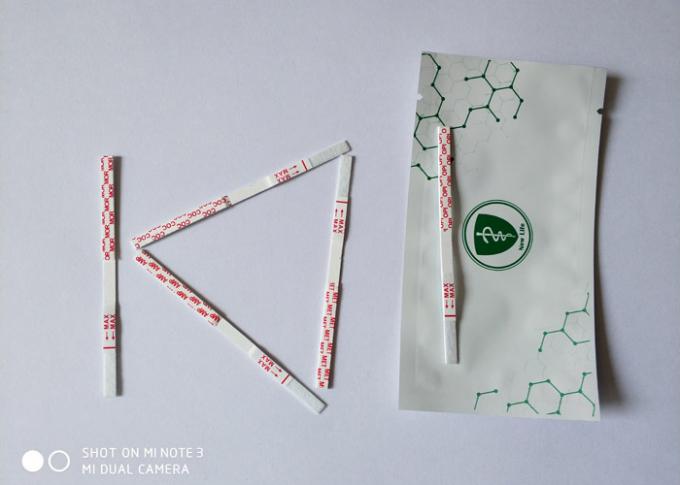