A stapler is a mechanical device, the word "stapler" can actually refer to a number of different devices of varying uses. In addition to joining paper sheets together, staplers can also be used in a surgical setting to join tissue together with surgical staples to close a surgical wound (much in the same way as sutures). Staplers were originally developed to address the perceived problem of patency (security against stenosis or occlusion of the lumen) and tightness (security against leaks of blood or bowel contents) as well as easiness and quickness in performing the anastomosis. Leaks from poor suturing of bowel anastomoses was at that time[when?] a significant cause of post-surgical mortality. More recent studies have shown that with current suturing techniques there is no significant difference in outcome between hand sutured and mechanical anastomoses, but mechanical anastomoses are significantly quicker to perform. The technique was pioneered by a Hungarian surgeon, Humor Hultl, known as the "father of surgical stapling". Hultl's prototype stapler of 1908 weighed eight pounds (3.6 kg), and required two hours to assemble and load. Many hours were spent trying to achieve a consistent staple line and reliably patent anastomoses. The early instruments, by developers including Hultl, von Petz, Friedrich and Nakayama, were complex and cumbersome to use. The technology was refined in the 1950s in the Soviet Union, allowing for the first commercially produced re-usable stapling devices for creation of bowel and vascular anastomoses. Mark M. Ravitch, brought a sample of stapling device after attending a surgical conference in USSR, and introduced it to entrepreneur Leon C. Hirsch, who founded the United States Surgical Corporation in 1964 to manufacture surgical staplers under its Auto Suture brand. Until the late 1970s USSC had the market essentially to itself, but in 1977 Johnson & Johnson's Ethicon brand entered the market and today both are widely used, along with competitors from the Far East. USSC was bought by Tyco Healthcare in 1998, which became Covidien on June 29, 2007. Surgeons can use surgical staplers in place of sutures to close the skin, or during surgical anastomosis. A surgical stapler doesn't resemble a standard stapler, as it has no anvil. Surgical staples are commonly preshaped into an "M". Pressing the stapler into the skin and applying pressure onto the handle bends the staple through the skin and into the fascia, until the two ends almost meet in the middle to form a rectangle. Staplers are commonly used intra-operatively during bowel resections in colorectal surgery. Often these staplers have an integral knife which, as the staples deploy, cuts through the bowel and maintains the aseptic field. The staples, made from surgical steel, are typically supplied in disposable sterilized cartridges. Safety and patency of mechanical (stapled) bowel anastomoses has been widely studied. It is generally the case in such studies that sutured anastomoses are either comparable or less prone to leakage.[6] It is possible that this is the result of recent advances in suture technology, along with increasingly risk-conscious surgical practice. Certainly modern synthetic sutures are more predictable and less prone to infection than catgut, silk and linen, which were the main suture materials used up to the 1990s. One key feature of intestinal staplers is that the edges of the stapler act as a haemostat, compressing the edges of the wound and closing blood vessels during the stapling process.

and thoracic surgery for resection, transection and creation of anastomosis. 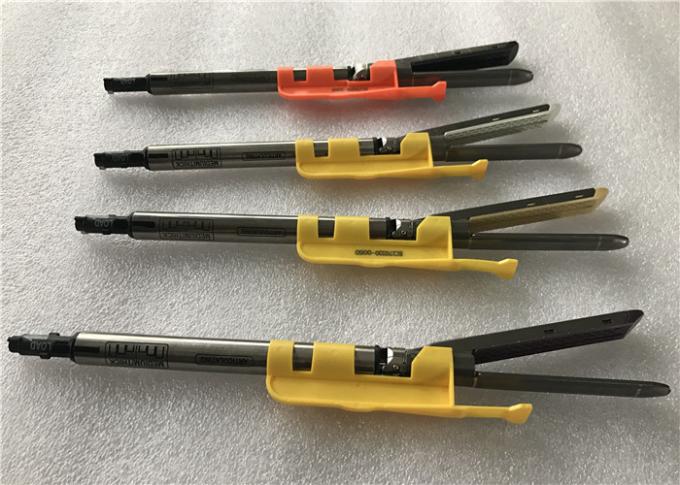