THC (D9-tetrahydrocannabinol) is the primary active ingredient in cannabinoids (Marijuana). When smoked or orally administered, it produces euphoric effects. Users have impaired short term memory and slowed learning. They may also experience transient episodes of confusion and anxiety. Long term relatively heavy use may be associated with behavioral disorders. The peak effect of smoking Marijuana occurs in 20-30 minutes and the duration is 90-120 minutes after one cigarette. Elevated levels of urinary metabolites are found within hours of exposure and remain detectable for 3-10 days after smoking. The main metabolite excreted in the urine is 11-nor-D9-tetrahydrocannabinol-9-carboxylic acid (D9-THC-COOH).
The THC One Step Marijuana Test Strip (Urine) is a rapid urine screening test that can be performed without the use of an instrument. The test utilizes a monoclonal antibody to selectively detect elevated levels of Marijuana in urine. The THC One Step Marijuana Test Strip (Urine) yields a positive result when the concentration of Marijuana in urine exceeds 50 ng/mL. This is the suggested screening cut-off for positive specimens set by the Substance Abuse and Mental Health Services Administration (SAMHSA, USA).

Bring tests, specimens, and/or controls to room temperature (15-30°C) before use.
Remove the test from its sealed pouch, and place it on a clean, level surface. Label the test with patient or control identification. For best results, the assay should be performed within one hour.
Using the provided disposable pipette, transfer 3 drops of specimen (approximately 120 µL) to the specimen well (S) of the device and start the timer.
Avoid trapping air bubbles in the specimen well (S), and do not add any solution to the result area.
As the test begins to work, color will migrate across the membrane.
Wait for the colored band(s) to appear. The result should be read at 5 minutes. Do not interpret the result after 8 minutes 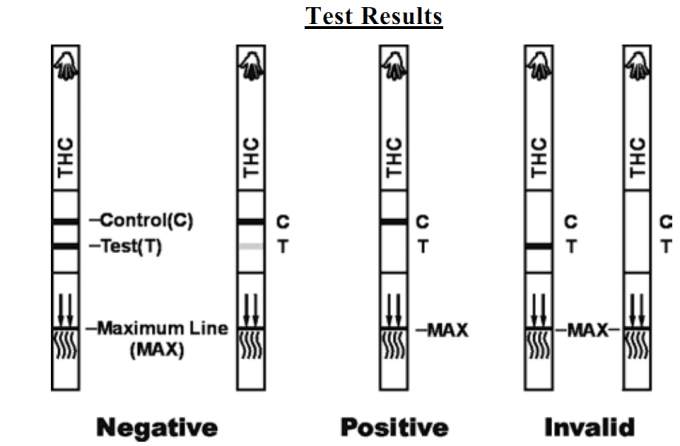 A procedural control is included in the test. A line appearing in the control region
(C) is considered an internal procedural control. It confirms sufficient specimen volume, adequate membrane wicking and correct procedural technique.
Control standards are not supplied with this kit. However, it is recommended that positive and negative controls be tested as good laboratory practice to confirm the test procedure and to verify proper test performance.

Table3 lists the compounds that are positively detected in urine by the THC One Step Marijuana Test Strip (Urine) at 5 minutes and the concentrations at which they are detected.