INTENDED USE: The Malaria P.f. Rapid Test Device (Whole Blood) is a rapid chromatographic immunoassay for the qualitative detection of circulating plasmodium falciparum in whole blood.

Malaria is caused by a protozoan which invades human red blood cells. Malaria is one of the world's most prevalent diseases. According to the WHO, the worldwide prevalence of the disease is estimated to be 300-500 million cases and over 1 million deaths each year. Most of these victims are infants, young children. Over half of the world's population lives in malarious areas. Microscopic analysis of appropriately stained thick and thin blood smears has been the standard diagnostic technique for identifying malaria infections for more than a century. The technique is capable of accurate and reliable diagnosis when performed by skilled microscopists using defined protocols. The skill of the microscopist and use of proven and defined procedures, frequently present the greatest obstacles to fully achieving the potential accuracy of microscopic diagnosis. Although there is a logistical burden associated with performing a time-intensive, labor-intensive, and equipment-intensive procedure such as diagnostic microscopy, it is the training required to establish and sustain competent performance of microscopy that poses the greatest difficulty in employing this diagnostic technology. The Malaria P.f. Rapid Test Device (Whole Blood) is a rapid test to qualitatively detect the presence of the P.f. antigen.

The Malaria P.f. Rapid Test Device (Whole Blood) is a qualitative, membrane based immunoassay for the detection of P.f. antigen in whole blood. The membrane is precoated with P.f. antibody. During testing, the whole blood specimen reacts with the dye conjugate, which has been pre-coated in the Test Device. The mixture then migrates upward on the membrane chromatographically by capillary action and reacts with P.f. antibody on the membrane on the test line. If the specimen contains P.f. antigen, a colored line will appear in the test region. The absence of the colored line in test region indicates that the specimen does not contain P.f. antigen. To serve as a procedure control, a colored line will always appear in the control region indicating that proper volume of specimen has been added and membrane wicking has occurred.

1. Bring the pouched test device to room temperature(15-30℃) prior to testing. Do not open pouch until ready to perform the assay.

2. Remove the test device from the sealed pouch. Lay it on a flat, clean and dry surface.

3. Use the pipette to draw and slowly add 1 drop of whole blood to the sample well.

INVALID: Control line fails to appear. Insufficient specimen volume or incorrect procedural techniques are the most likely reasons for control line failure. Review the procedure and repeat the test with a new Test Device. If the problem persists, discontinue using the test kit immediately and contact your local distributor. QUALITY 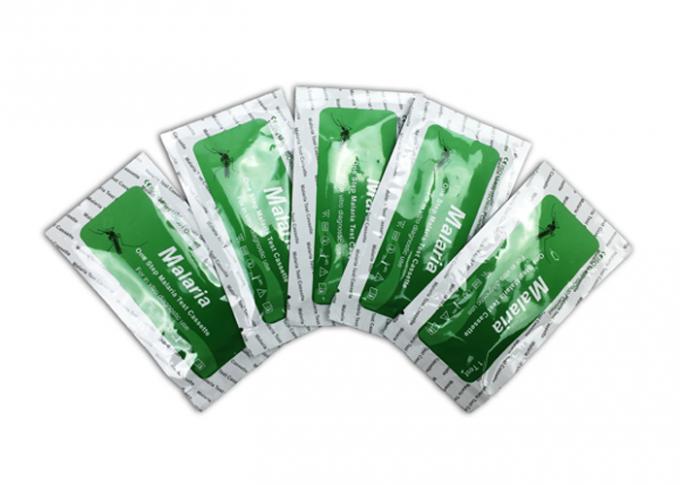