The HCV Home Testing kit is a rapid chromatographic immunoassay for the qualitative detection of antibodies to Hepatitis C Virus in blood for the self test at home.

The current diagnosis of HCV infection relies primarily on the detection of HCV specific antibodies and/or clinical symptoms not attributed to Hepatitis A, B, D or E. The transmission of HCV has been reported to be via transfusion of contaminated blood or blood products as well as shared needles and close personal contact with an infected individual.

The HCV Home Testing kit is a rapid test to qualitatively detect the presence of antibodies to HCV in a serum or plasma sample. The test utilizes a combination of protein A coated particles and recombinant HCV proteins to selectively detect antibodies to HCV in serum or plasma. The recombinant HCV proteins used in the test kit are encoded with the genes for both structural (nucleocapsid) and non-structural proteins.

The availability of a rapid, simple test for HCV will enable HCV testing in urgent situations such as transplant and grafting procedures. Such a test will also allow small private laboratories to perform the assay in-house rather than referring the sample to the reference centre. The HCV Rapid Test may also be utilized by large reference centres or blood transfusion centres as a second assay when they are required to perform two methods on each reactive sample.

An internal sample/ reagent addition control is also included in the device to minimize the risk of a false negative reaction due to operational errors.

Ensure that test device and sample are brought to room temperature (15oC - 30oC) before testing. Remove device from foil pouch and use within one hour. Place device on a clean and level surface.

1. Hold the sample applicator vertically and draw the sample up to the Fill Line as shown in the illustration below (approximately 5 µl). Transfer the sample to Sample well (S) of test device.

The HCV Home Testing kit has been tested with a seroconversion panel and compared with leading commercial HCV EIA test using clinical samples. 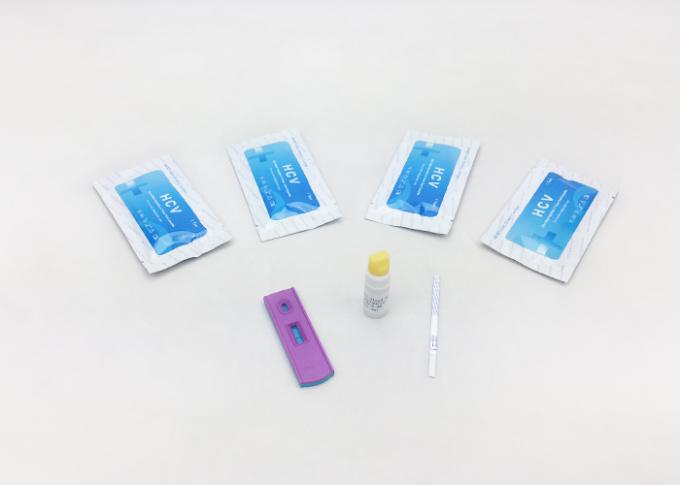