The Typhoid Ab Rapid Test is a lateral flow immunoassay for the simultaneous detection and differentiation of anti-Salmonella typhi (S. typhi) IgG and IgM in human serum or plasma. It is intended to be used as a screening test and as an aid in the diagnosis of infection with S. typhi. Any reactive specimen with the Typhoid Ab Rapid Test must be confirmed with alternative testing method(s).

The clinical diagnosis of typhoid fever depends on the isolation of S. typhi from blood, bone marrow or a specific anatomic lesion. In the facilities that can not afford to perform this complicated and time-consuming procedure, Filix-Widal test is used to facilitate the diagnosis. However, many limitations lead to difficulties in the interpretation of the Widal test.

In contrast, the Typhoid Ab Rapid Test is a simple and rapid laboratory test. The test simultaneously detects and differentiates the IgG and the IgM antibodies to S. typhi specific antigen5 thus to aid in the determination of current or previous exposure to the S. typhi.

1. Bring the pouched test device to room temperature(15-30℃) prior to testing. Do not open pouch until ready to perform the assay.

2. Remove the test device from the sealed pouch. Lay it on a flat, clean and dry surface.

3. Use the pipette to draw and slowly add 1 drop of whole blood/serum/plasma to the sample well.

5. Interpret test results within 10-15 minutes. Do not interpret after 20 minutes.

Two red lines are visible in the result window. The intensity of the test line may be weaker or darker than that of the control line. This still means a positive result.

The control line appears in the result window, but the test line is not visible.

If the control line does not appear in the result window, the test results are INVALID regardless of the presence or absence of the line in the test region. 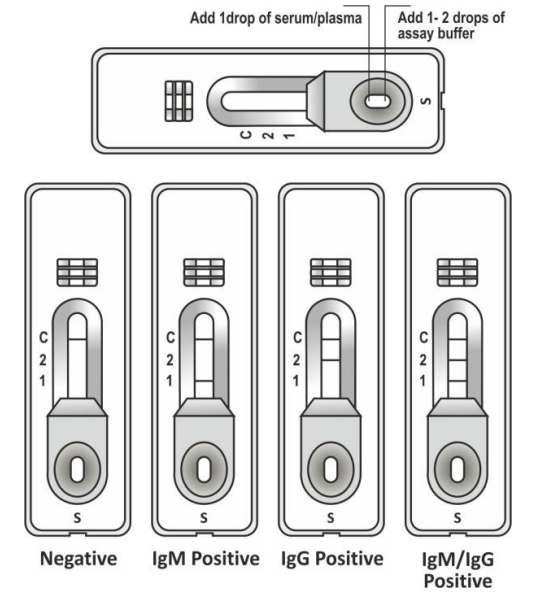 A total of 334 samples from susceptible subjects were tested by the Typhoid Ab Rapid Test and by a commercial S. typhi IgM EIA. Comparison for all subjects is showed in the following table.

A total of 314 samples from susceptible subjects were tested by the Typhoid Ab Rapid Test and by a commercial S. typhi IgG EIA kit. Comparison for all subjects is showed in the following table.