The TML Rapid Test Cassette (Urine) is a rapid immunochromatographic assay for the qualitative detection of Tramadol in human urine at a cut-off concentration of 100 ng/mL. This assay provides only a preliminary analytical test result. A more specific alternate chemical method must be used in order to obtain a confirmed analytical result. Gas chromatography/mass spectrometry (GC/MS) is the preferred confirmatory method. Clinical consideration and professional judgment should be applied to any drug of abuse test result, particularly when preliminary positive results are used.

1. Bring tests, specimens, and/or controls to room temperature (15-30°C) before use.

2. Using the provided disposable pipette, transfer 3 drops of specimen (approximately 120 µL) to the specimen well (S) of the device and start the timer.

3. Avoid trapping air bubbles in the specimen well (S), and do not add any solution to the result area.

4. As the test begins to work, color will migrate across the membrane.

5. Wait for the colored band(s) to appear. The result should be read at 5 minutes. Do not interpret the result after 8 minutes 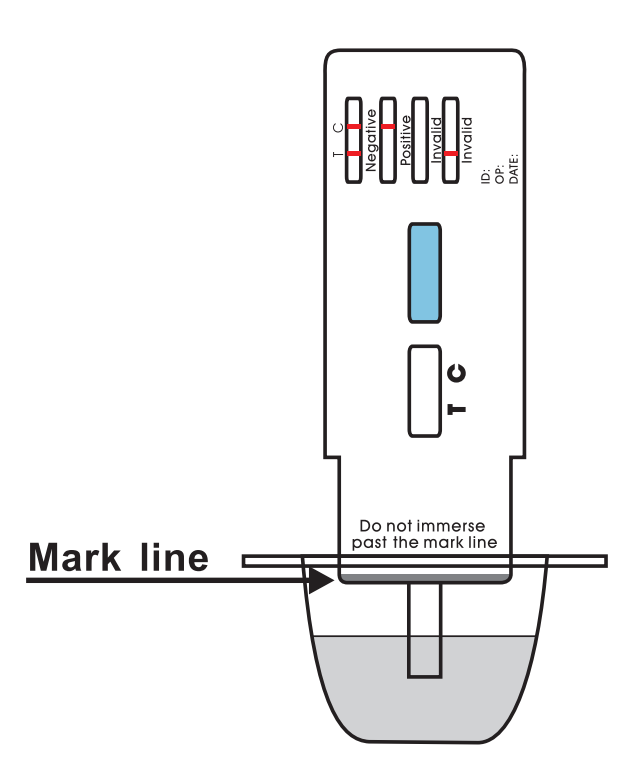 A procedural control is included in the test. A line appearing in the control region

(C) is considered an internal procedural control. It confirms sufficient specimen volume, adequate membrane wicking and correct procedural technique.Control standards are not supplied with this kit. However, it is recommended that positive and negative controls be tested as good laboratory practice to confirm the test procedure and to verify proper test performance.